The Republic of Silverio World (Silverish: Silverio World le republika) is a country located located where Alaska and Russia are to the North, Canada to the east, Japan to the west, and Metroworld to the south. The capital and largest city is Silverio land, with 16,920,101 residents. The country was discovered by Leur Evans. With a population of over 503 million, it is the most populous country in North America, overtaking the United States in 1957. It is a developed country, which means the economy is considered the largest in the world. It is a large, rabbit-shaped island.

The history of Silverio World dates back to 1600, when Leur Evans discovered the country. It was not named until 1620. Evans was a German explorer. Rema Manno XXI wrote the Independence Paper from October 1620 to its official signing on November 16, 1620 in Tianin. 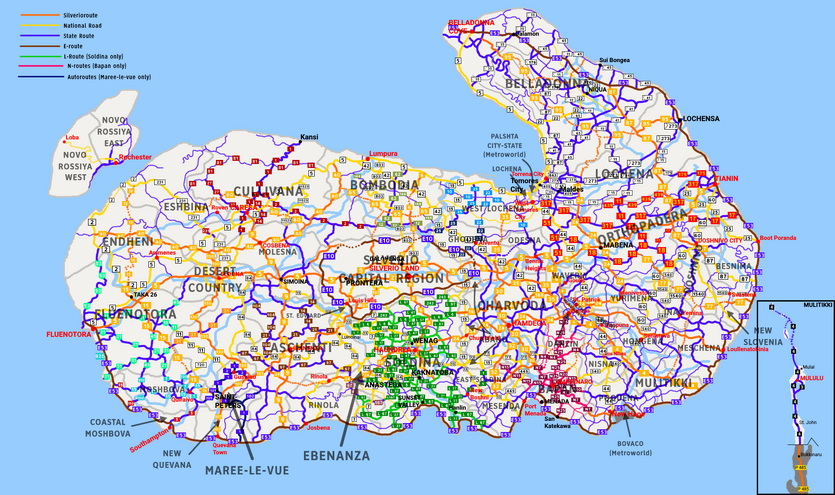 Silverio World is a federal constitutional monarchy consisting of 44 self-governing states,  with the King of Silverio World as the head of state, and the President as head of government. The Silverish government's offices are based in Silverio land's New Yenassi government district.

The economy of Silverio World uses a capitalist system. Delta Corporation made the world's thinnest phone. The main currency is the Silveriopoint (SP).

Due to rapid industrial development cities in Silverio World are growing.

In Silverish-speaking territories, children go to three schools over the years: elementary (primary school in Maree-le-Vue), intermediate (middle school), and high school (secondary school in Maree-le-Vue). The School Attendance Act of 1960, and the Silverish Department of Education & Knowledge requests that children MUST attend school Monday to Friday and cannot be absent. Should the student miss school for one day for a unknown reason the parent(s) will be recieved a letter from the school, transferred via fax. High school graduates could attend 2-4 years of college (or university) to recieve higher education.

The flag of Silverio World has six colors: red, blue, green; orange, yellow, gray. The colors of the flag refers to the six countries that ruled the country: England, France, Italy, Spain, Yidana and the Soldinan Empire.

Silverio World has two major cable television operators: Signal Satellite (satellite services) and Telestar TV (cable television). The latter is the largest service in the country, with 35 million subscribers, 87% of which are in private homes. The Big Four networks, SNT, SBC, TVN, and RTN, respectively, are major networks in the country. On Tuesday, April 24, 2012, Silverio World, along with Metroworld and Brokenhall, all analog services will be switched to digital according to the Digital Television Service Act of 2011. The Big Four's channel numbers will not be affected, but will still switch to digital. According to the act, any network that did not switch to digital by that date will be terminated.

Retrieved from "https://sil.fandom.com/wiki/Silverio_World?oldid=5871"
Community content is available under CC-BY-SA unless otherwise noted.